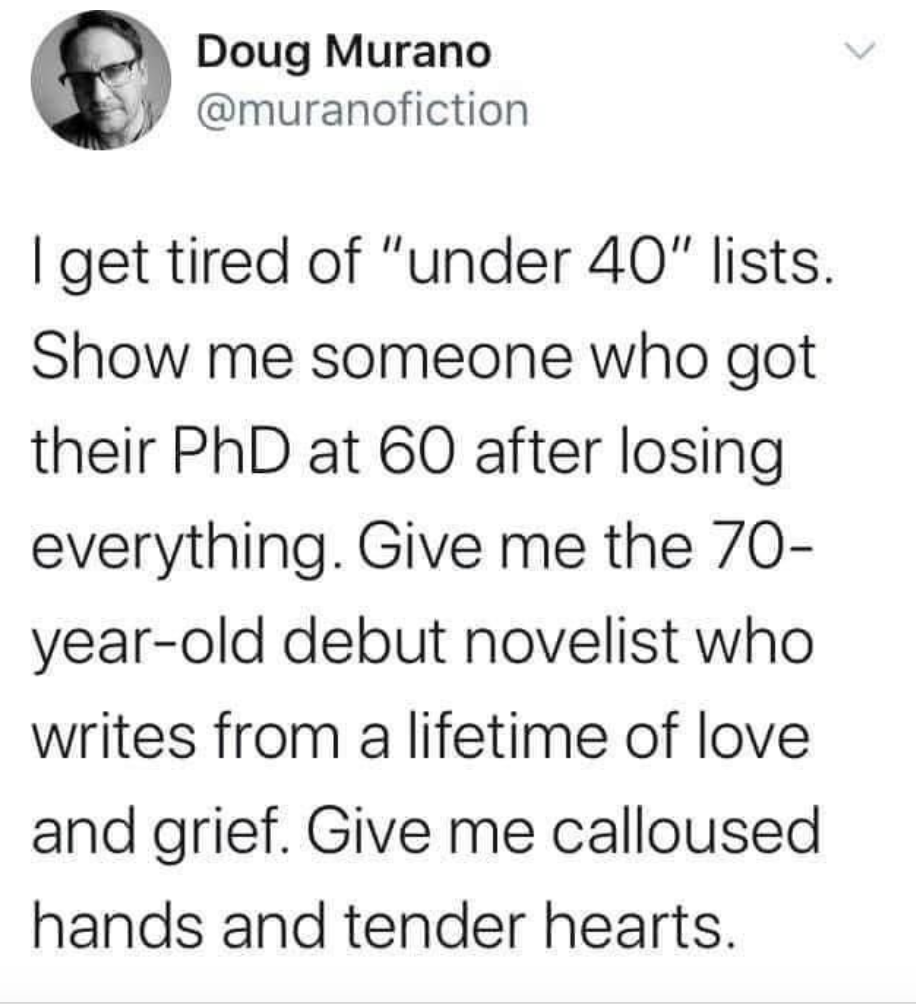 I saw the above post today and realized that I agreed with the author's sentiment. I hadn't thought about it in this way before, but it made sense. Why is society overly-obsessed with people who achieve big things at a young age?

It's almost as if they're saying that if you're over 40 and do great things then it's expected of you and/or anything you achieve once you're over 40 isn't as special.

And it's not just Forbes. Society in general is obsessed with youth and achieving whilst young. We tend to write off athlethes who have aged beyond "thresholds" associated with their sport (e.g. Tennis players over 35), which then makes us comment in incredulity at those who "somehow manage" to stay on top even beyond the arbitrary age threshold we apply to their sport.

I can empathize with the thinking that achieving big things whilst young is something special. Because underlying this celebration is the idea that the youth are inexperienced and still developing, and that to thus achieve something big makes the achievement worthy of extra praise. The corollary is that to achieve something big when one is much older and more experienced is less impressive, which is why the over 40's don't seem to receive as much praise.

But I think it really depends on perspective. Usually people in their 40's tend to be established in life, and have their routine and identity set, both personally and professionally. To break from this, take a risk and go onto achieve something big is in a way more challenging than doing such a thing when one is fresh out of school with nothing to lose. I wish society would acknowledge this more.

And I think that this emphasis on youth impacts how we feel about ourselves. In my mid-30's I found myself thinking that I hadn't achieved enough. So I decided to search online for stories of people who achieved big things later in life and thankfully I found many examples. I thought to myself, these people must have had to overcome external naysayers and internal doubts to take the risks that they took and to keep believing in themselves. I doubt anyone was telling Samuel L Jackson in his 40's that the world was his oyster and that he still had plenty of time to "make it".

Let's talk about age itself.

We measure human age in years. But years are actually an arbitrary measure. It's true that they correspond to the time it takes for the Earth to go around the Sun once. But this is only visibly apparent to us puny humans depending on where we stand on the planet. Even on the scale of a single day - i.e. the time it takes for the Earth to do one rotation on its axis - what you experience depends on where you are on the planet. At the North pole, there are periods when you never see the sun set.

I think we use years as a measure mainly because humans are good at mentally handling small numbers. If we were to measure age in seconds then we're all severall million seconds old and we'd basically stop counting. We would probably think in terms of various thresholds, e.g. the first 1000 seconds, first 10,000 seconds, first 1 million seconds. And there would be other thresholds after that but for the most part we'd leave the values in between to themselves without caring about them.

At this point you might say that old age is a thing though. That it's visibly apparent when people grow old - their hair goes white and/or they lose it, their skin becomes wrinkled, etc. This is true but only to an extent. Biological aging does not happen in lockstep with the no. of years you've been alive. Some people look more youthful than average in their old age, others look older than average in their younger years. And we have some personal influence over how this pans out, in terms of diet, exercise, stress levels, lifestyles, etc.

I don't think pressuring ourselves to achieve everything in our younger years is a useful way of thinking. A more useful way of thinking is to accept that people mature at different rates and that there is actually more time available in life to achieve things than we care to admit. Especially so in today's modern, developed world where we have the basis provided along with so many comforts and conveniences, not to mention lots of information on how we can live better.

It's ok if you didn't figure out who you wanted to be until you hit your late 40's. It's ok if you didn't find love and get married until you were 50. And it's also ok if you did do this at 22. It's not easy to go against the grain of society, and there will be people and situations that will try to rule you out by your age. Not to mention your own inner doubts and insecurities. This is probably a difficult path to tread. But there are other people who have done it and continue to do it. And for the sake of your own personal happiness you will have to do it too in the end.